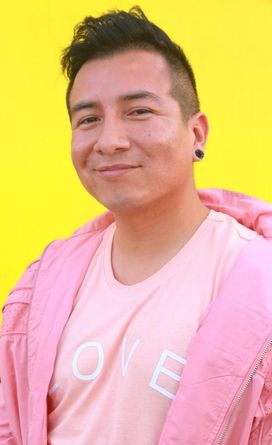 RONNIE VELIZ
THEY • THEM • THEIRS
​CO-FOUNDER

Ronnie, born in Trujillo and raised in San Fernando Valley, is a low-income trans non-binary, queer, Peruvian immigrant who advocates and organizes for youth empowerment, social justice, and LGBTQ+ liberation. Ronnie fled Perú who survived bullying and rape. They arrived to the United States at age 16. After growing up in Van Nuys, Ronnie and their family reunited in Mission Hills in 2004. When Ronnie first came out to their family, it did not go well.

Ronnie's movement work began while they were homeless for nine months after coming out. Their activism and advocacy intensified with the Gay-Straight Alliance (GSA) movement while attending LA Valley College in 2007 and volunteering for Vote for Equality (VFE), where they learned to mobilize students of color for the FAIR Education Act, conversion therapy ban, and marriage equality. Later on, Ronnie became President of Social Justice award-winning student club Matadors For Equality (MFE) at California State University Northridge in 2011 and 2012 where Ronnie learned to develop workgroups and inclusive programming for immigrant youth, youth with disabilities, and trans and queer students of color.

​In 2013, Ronnie was selected as one of five young organizers to be part of a political fellowship in the San Francisco Bay Area where Ronnie helped leading grassroots campaigns. Some of the projects they organized for include the development of the first California Fire Station Health Center (Firehouse Clinic) in the city of Hayward; improving public safety in the city of Fremont; contributing to the passage of Measure F  for upgrades to the Marin General Hospital -Marin’s only designated trauma center, and mobilizing youth and families for a 2000+ people demonstration in support of immigration reform with the campaign Pathway to Citizenship in the conservative Central Valley.

Following successful campaigns as a community organizer, Ronnie decided to explore being a public speaker and went on tour statewide with their keynote presentation “SegreGAY✝ion: Growing Up as a Queer Latino (Im)migrant in a Religious Conservative Family” which increased awareness of Latinx pride, intersectionality, and family acceptance at different community colleges as well as UC and CSU campuses. Ronnie went on a second statewide tour promoting youth empowerment, immigrant rights, and family acceptance with artist Carolina Alcala as the creative director of their collaborative art project, “Protect Our Children: (Re)creating Family Acceptance”.

Ronnie is a first-generation Valley student of color with a Bachelors degree in Psychology and a background in public policy, public education, and arts. In 2017, Ronnie was accepted in the Masters in Social Work program at California State University Northridge. They will be graduating in 2019 with a MSW emphasis on diversity, inclusion, and policy.

For self-care, Ronnie enjoys writing poems, painting, cooking, spending time outdoors and on the dancefloor.
BACK TO BOARD